Ins and Outs of Demurrage and Detention

The process of shipping a container from one point to another includes a number of factors, some of which are demurrage and detention. These are a matter of allowed free-days, determining the number of days a shipper can use the container for free. If this free time is exceeded, a user has to pay a demurrage and detention charge, usually calculated per day. World Maritime News spoke to Florian Frese, Director of Marketing at xChange, a Germany-based startup focusing on reposi
10 views0 comments

APL to Support The Ocean Cleanup

Singapore-based shipping company APL has decided to provide free shipping to The Ocean Cleanup, a non-government, non-profit organization working to develop advanced technologies to rid the world’s oceans of plastic. As an official partner of The Ocean Cleanup, APL will transport containers of components and equipment for the extraction of plastic pollution from the oceans from 2019 to 2020. “We applaud The Ocean Cleanup’s course in cleaning up our oceans. In partnering with
13 views0 comments 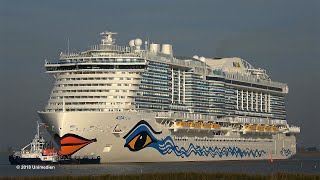 The world’s first cruise ship to be powered by LNG, AIDAnova, has been transferred to Eemshaven, Netherlands. The conveyance of the 180,000 tonne ship along the small river Ems was quite an endeavor. After a slight delay, the ship embarked on its first voyage on Tuesday, October 8, in the evening hours heading toward Leer, followed by the Ems barrier at Gandersum, and finally reaching Eemshaven on Wednesday morning. The transfer itself was a record, as AIDAnova, is the larges
4 views0 comments

Germany’s Deutsche Bank has agreed the sale of a USD 1 billion portfolio of legacy shipping loans to an entity owned by funds managed by Oak Hill Advisors and Värde Partners. The bank said that the transaction is expected to close in early Q3 2018, subject to relevant regulatory approvals. Deutsche Bank informed that it remains committed to the shipping business. “Following this disposal and other derisking strategies we have implemented, the bank will be left with a performi
5 views0 comments

The transformation of Maersk Group from a conglomerate to an integrated global container logistics company is expected to take between three to five years, the Danish giant revealed during its Capital Markets Day held on February 21. One year into its new strategy, A.P. Moller – Maersk claims to have already started unlocking value from its integration in the form of improved terminal utilisation, improved inland services, optimised hub operations, joint production planning b
12 views0 comments

Shipping Digitalization Will Be A Journey

It will be a long journey for shipping companies to embark on their digital transformation, Robert Squire, Director Thales Certus, said at Posidonia 2018. “The way the shipping industry is approaching digitization is very piecemeal and very reactive. They will only request solutions for specific issues they face at any particular point in time as opposed to approaching digital transformation in a more strategic, long-term approach,” Squire explained. “Return on investment tak
12 views0 comments

Everyone ships, regardless of industry, and your profitability is influenced by the shipping prices you get, which is why it’s incredibly important to find someone reliable that fits your company’s freight needs. But there are thousands of freight forwarding companies out there, so how do you know which one to use? First, it’s important to look at yourself, as a company. Do they fit our needs? What type of company are you? What is the cargo you’re going to ship? Is it always
25 views0 comments

Imports set a second all-time monthly record high this summer as retailers brought in merchandise for the busy holiday season, and are continuing at unusually high levels this month, according to the monthly Global Port Tracker report released today by the National Retail Federation and Hackett Associates. “When imports break records two months in a row, it’s hard to see that as anything other than a good sign about what retailers expect in consumer demand,” NRF Vice Presiden
13 views0 comments 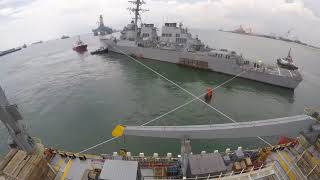 Video: USS McCain Gets A Ride

US Navy’s Arleigh Burke-class destroyer USS John S McCain (DDG 56) has been moved in preparation for on load to the heavy lift vessel MV Treasure. MV Treasure will transport McCain to Fleet Activities Yokosuka, where it is scheduled to undergo repairs when it arrives at the site in October. John S. McCain suffered major damage in a collision with the oil/chemical tanker Alnic MC on August 21 while the ships were underway in waters east of the Straits of Malacca and Singapore.
3 views0 comments

Oil prices may rise to $60 a barrel by the end of this year or by early 2018 as OPEC and non-OPEC producers are expected to extend supply cuts beyond March, while oil inventories continue to decline, a former Saudi energy ministry official said in a speech Washington. “With the current arrangement and commitment of major producers, and their willingness to adjust and extend the agreement, I believe as commercial oil stocks continue to contract, oil prices will gradually incre
4 views0 comments

There's just something satisfying about launching a large vessel. The manpower associated, the huge waves, and watching a massive ship roll and tumble like a bathtub toy. But a great ship is only as valuable as the cargo it contains, and for all your cargo shipping needs, remember to call ARI Shipping, the most relaible and affordable shipper around! Save today and find out about getting FREE CUSTOMS CLEARANCE. via RaheRast #shipping #ships #vessel #shipdeployment #shiplaunch
6 views0 comments

One of the key issues ship owners and operators are facing is ensuring the efficient use of energy while at the same time meeting new environmental regulations being implemented on a global and regional basis. Getting an insight into energy optimisation and alternative energy sources is central to both cost and environmental control. Visitors to the maritime exhibition Europort will be able to take part in some unique events at which cutting edge technology solutions will be
6 views0 comments 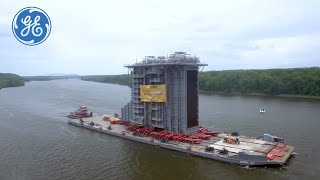 The biggest promotional UK shipping event in recent history will be kicked-off by Shipping Minister John Hayes next week. The world famous London International Shipping Week (LISW) will be attended by delegates from at least 50 countries including more than 15 foreign ministers from the likes of Saudi Arabia, Nigeria and Ghana. The government will host bilateral meetings with politicians and senior industry figures to explore partnerships, future opportunities outside the Eur
28 views0 comments

Hurricane Harvey has wreaked havoc on global oil markets as almost a quarter of US refining capacity was shut, sending reverberations throughout Asia’s refined products as well as product tanker markets. While many USGC refineries and key pipelines are in the midst of restarting or have already resumed operations, around 3.8 mmb/d of capacity remains shut as of Tuesday according to Reuters. Refinery outages in the USGC have led to a jump in jet fuel as well as gasoline shipme
4 views0 comments

Is Trump Killing the Dollar?

For nearly a century, the U.S. dollar has been viewed as the financial world’s ultimate safe haven. No other currency has promised the same degree of security and liquidity for accumulated wealth. In past times of trouble, skittish investors and prudent central banks have all piled into dollar-denominated assets, not least U.S. Treasury bonds. This may no longer be the case. President Donald Trump’s chaotic administration has severely undermined confidence in the greenback. S
17 views0 comments

After more than 80 hours of multinational search efforts, the U.S. Navy said it suspended search and rescue operations for USS John S. McCain sailors that went missing after the collision with the Liberian-flagged tanker Alnic MC. U.S. Navy and Marine Corps divers will continue search and recovery efforts inside flooded compartments in the ship for the missing sailors. Until now, the divers recovered the remains of one sailor, confirmed as Electronics Technician 3rd Class, Ke
2 views0 comments 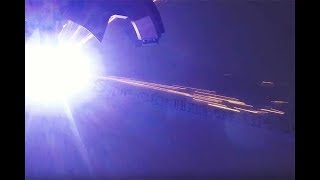 Miami-based cruise company Royal Caribbean International has marked the official start of construction of its new Quantum Ultra-class ship by cutting the first piece of steel at the Meyer Werft shipyard in Papenburg, Germany. As disclosed, the newbuilding will be named Spectrum of the Seas. Set to debut in 2019, Spectrum will be the next evolution of the cruise line’s Quantum class of ships placing the ship in a new class of its own. The Quantum Ultra ship will specifically b
5 views0 comments
1
2345