‘Eye in the Sky’ to Tackle Illegal Shipping

UK has unveiled the first images from a new satellite which can see through clouds and image the Earth round the clock to help stop oil spills and illegal shipping. NovaSAR-1, the first Synthetic Aperture Radar (SAR) satellite made in the UK, can detect oil spills in the oceans, help spot suspicious shipping activity and monitor the effects of deforestation. “This ‘eye in the sky’ can capture an image a dozen times wider than the Strait of Dover and the data it provides can h
12 views0 comments

Global Trade at a Crossroads

2017 was a difficult year for the shipping industry in various respects including geopolitical developments, which raised many eyebrows across the board. Rising protectionism and an anti-globalization sentiment have emerged as major concerns of the market players. The year opened with the inauguration of a new American president, Donald Trump, who is championing the “America First” ideology. In Europe, the United Kingdom decided to pull out from the European Union, while in G
8 views0 comments

EU Ports at Risk amid Brexit

The UK Chamber of Shipping has warned that Brexit would have a wide impact on European ports saying that “the dangers to major EU ports has been understated.” The Chamber informed that the return of border controls would lead to increased bureaucracy, “guaranteed” lorry gridlock and threats to the prosperity of both EU member states and the UK. “The EU sells GBP 240 billion of goods to the UK each year, most of which travels through ports. So the negative impact of a so-calle
13 views0 comments

European Union voters in France, Germany, Italy and Greece think their countries are heading in the wrong direction but there is not yet any Europe-wide inclination to follow Britain towards exiting the bloc, according to a poll published on Thursday. Britain’s shock June 23 Brexit vote, which was praised at the time by then U.S. presidential candidate Donald Trump as a “miracle”, has raised questions about the future of post-World War Two attempts at European integration. Af
11 views0 comments 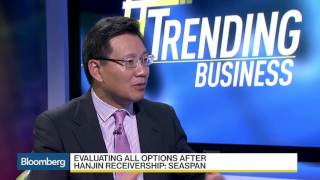 Hanjin, the Lehman Bros. of Shipping

Wait and See: The Brexit Effect

Keep calm and carry on. That very British of phrases was recently used several times in a IHS Maritime expert panel on the topic of Brexit and its effects on international trade and shipping. Brexit—the decision by Britons through popular vote to leave the European Union—was met with concern and disbelief by many observers around the world and had the effect of sending shockwaves through financial markets in the immediate aftermath. Most experts agree that the effects of the
6 views0 comments