The International Maritime Organization’s intentions to delist over 80 countries, including South Africa, from its STCW Whitelist has major implications for the country’s maritime sector. Sobantu Tilayi, the CEO of the South African Maritime Safety Authority (SAMSA), confirmed that the agency was extremely concerned by IMO’s planned action. “Even as we have a serious situation in our hands, and should never have found ourselves in this position, I am confident that we will ac
9 views0 comments 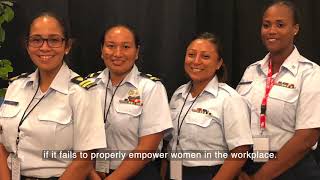 The International Maritime Organization (IMO) will provide an opportunity to raise awareness of the importance of gender equality at this year’s World Maritime Day with the “Empowering Women in the Maritime Community” theme. In line with the United Nations’ Sustainable Development Goals, the theme would also highlight the important, yet under-utilized, contribution of women within the maritime sector. It gives IMO the opportunity to work with various maritime stakeholders to
9 views0 comments
ARI Media

Hovering just over 1,000 nautical miles off the coast of San Francisco, a vortex of marine debris, trash and plastic has steadily accumulated to a gargantuan size. Scientists are finally getting round to cleaning up the so-called Great Pacific garbage patch, but it is symptomatic of a larger problem. Millions of tonnes of plastic and other forms of marine debris are funnelled into the sea every day, damaging wildlife and biodiversity. The general consensus is that land-based
3 views0 comments
ARI Media

The maritime industry is at a crossroads. It has reached a point in its history where it has to pick the right path to meet its decarbonization targets. Specifically, the International Maritime Organization’s (IMO) climate strategy has set out to reduce the total greenhouse gas emissions by at least 50% by 2050. Nevertheless, the shipping world is yet to carve out the strategy on how to achieve that. To propel the industry into the future, a large burden has fallen on the eng
6 views0 comments
ARI Media

Thousands of ships are set to install “emissions cheat” systems that pump pollutants into the ocean to beat new international rules banning dirty fuel. The global shipping fleet is rushing to meet a 2020 deadline imposed by the International Maritime Organization (IMO) to reduce air pollution by forcing vessels to use cleaner fuel with a lower sulphur content of 0.5%, compared with 3.5% as currently used. The move comes after growing concerns about the health impacts of shipp
9 views0 comments
ARI Media

The ongoing push toward automation of ships is not likely to result in crewless containerships anytime soon, according to the CEO of the world’s biggest shipping company, Soren Skou. The latest technological developments have seen the number of crew members on board Maersk Line’s ships halved when compared to two decades ago, which has, in turn, helped cut salary costs. However, Skou doesn’t believe giant containerships would be allowed to sail without humans on board, at lea
7 views0 comments
ARI Media

Emissions of greenhouse gases (GHGs) from global shipping are on the rise again, according to a study released today by the International Council on Clean Transportation (ICCT). This finding increases pressure on policymakers gathering at the International Maritime Organization (IMO) headquarters next week to take action on climate change. The new study combines state of the art global ship operations (AIS) data with detailed vessel characteristics for more than half a millio
11 views0 comments
ARI Media

How We Monitor and Enforce Ship Emissions

Air pollution from ships is a serious problem that doesn’t get enough attention. Kelvin Boot explains how environmental science can help ensure industry plays by the rules. Europe has an estimated 80,000 ship-visits to ports each year, and many of those ships burn cheap, low-quality fuel that creates polluting exhaust emissions, containing sulphur, nitrogen oxides and particulate matter. This thick, dirty, tar-like fuel oil is what’s left behind after the crude oil has been r
19 views0 comments
{"items":["5cde1429e2a55b007e8bab30","5cde142992c4aa00146c80bb","5cde1429c0a4120015e914ac","5cde1429a6d8520180573720","5cde14291b6a0800ae8a27d2","5cde142bf6bfda00159cc9b1","5cde142c370c9900159f7a2f","5cde142fe8b83e0162b539f4"],"styles":{"galleryType":"Columns","groupSize":1,"showArrows":true,"cubeImages":true,"cubeType":"fill","cubeRatio":1.3333333333333333,"isVertical":true,"gallerySize":30,"collageAmount":0,"collageDensity":0,"groupTypes":"1","oneRow":false,"imageMargin":32,"galleryMargin":0,"scatter":0,"rotatingScatter":"","chooseBestGroup":true,"smartCrop":false,"hasThumbnails":false,"enableScroll":true,"isGrid":true,"isSlider":false,"isColumns":false,"isSlideshow":false,"cropOnlyFill":false,"fixedColumns":1,"enableInfiniteScroll":true,"isRTL":false,"minItemSize":50,"rotatingGroupTypes":"","rotatingCropRatios":"","columnWidths":"","gallerySliderImageRatio":1.7777777777777777,"numberOfImagesPerRow":1,"numberOfImagesPerCol":1,"groupsPerStrip":0,"borderRadius":0,"boxShadow":0,"gridStyle":1,"mobilePanorama":false,"placeGroupsLtr":true,"viewMode":"preview","thumbnailSpacings":4,"galleryThumbnailsAlignment":"bottom","isMasonry":false,"isAutoSlideshow":false,"slideshowLoop":false,"autoSlideshowInterval":4,"bottomInfoHeight":0,"titlePlacement":"SHOW_ON_THE_RIGHT","galleryTextAlign":"center","scrollSnap":false,"itemClick":"nothing","fullscreen":true,"videoPlay":"hover","scrollAnimation":"NO_EFFECT","slideAnimation":"SCROLL","scrollDirection":0,"scrollDuration":400,"overlayAnimation":"FADE_IN","arrowsPosition":0,"arrowsSize":23,"watermarkOpacity":40,"watermarkSize":40,"useWatermark":true,"watermarkDock":{"top":"auto","left":"auto","right":0,"bottom":0,"transform":"translate3d(0,0,0)"},"loadMoreAmount":"all","defaultShowInfoExpand":1,"allowLinkExpand":true,"expandInfoPosition":0,"allowFullscreenExpand":true,"fullscreenLoop":false,"galleryAlignExpand":"left","addToCartBorderWidth":1,"addToCartButtonText":"","slideshowInfoSize":200,"playButtonForAutoSlideShow":false,"allowSlideshowCounter":false,"hoveringBehaviour":"NEVER_SHOW","thumbnailSize":120,"magicLayoutSeed":1,"imageHoverAnimation":"NO_EFFECT","imagePlacementAnimation":"NO_EFFECT","calculateTextBoxWidthMode":"PERCENT","textBoxHeight":0,"textBoxWidth":200,"textBoxWidthPercent":50,"textImageSpace":10,"textBoxBorderRadius":0,"textBoxBorderWidth":0,"loadMoreButtonText":"","loadMoreButtonBorderWidth":1,"loadMoreButtonBorderRadius":0,"imageInfoType":"ATTACHED_BACKGROUND","itemBorderWidth":1,"itemBorderRadius":0,"itemEnableShadow":false,"itemShadowBlur":20,"itemShadowDirection":135,"itemShadowSize":10,"imageLoadingMode":"BLUR","expandAnimation":"NO_EFFECT","imageQuality":90,"usmToggle":false,"usm_a":0,"usm_r":0,"usm_t":0,"videoSound":false,"videoSpeed":"1","videoLoop":true,"jsonStyleParams":"","gallerySizeType":"px","gallerySizePx":940,"allowTitle":true,"allowContextMenu":true,"textsHorizontalPadding":-30,"itemBorderColor":{"themeName":"color_12","value":"rgba(214,214,214,0)"},"showVideoPlayButton":true,"galleryLayout":2,"targetItemSize":940,"selectedLayout":"2|bottom|1|fill|true|0|true","layoutsVersion":2,"selectedLayoutV2":2,"isSlideshowFont":false,"externalInfoHeight":0,"externalInfoWidth":0.5},"container":{"width":940,"galleryWidth":972,"galleryHeight":0,"scrollBase":0,"height":null}}